You are here: Home / Education / Remains of WWI veteran to be buried at Iowa Veterans Cemetery 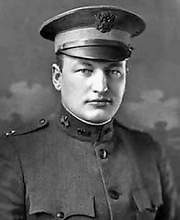 The remains of a World War One veteran who died in 1974 sat in a northeast Iowa funeral home for nearly four decades, but today the urn carrying the man’s ashes will be buried in the Iowa Veterans Cemetery. At two o’clock this afternoon, “hundreds” of motorcyclists are expected to escort Perrine’s remains to the cemetery where there’ll be a graveside service.

James O. Perrine was a captain in the Army who trained soldiers in the signal corps during World War I. Patrick Palmersheim of the Iowa Department of Veterans Affairs says Perrine was well-known in the world of physics and had been a University of Northern Iowa professor.

“He was a former vice president of AT&T Corporation from 1939 to 1951. He wrote the ‘Slide Rule Handbook’ in 1963. He’s an author of about eight other books,” Palmersheim says.  “He was an advisor to the U.S. Navy in World War II for submarine detection, so he’s got quite a history.”

Perrine was 88 when he died in Cedar Falls.  His wife had already died and there was a wake, but no funeral in 1974.  He has no living relatives. His son, who lived in Colorado, died in 1984.  Managers at a funeral home in the Cedar Falls area where the urn with Perrine’s remains had been stored called Palmersheim’s agency last December to see if a burial be could arranged at the Iowa Veterans Cemetery.

“Of course the first thing I thought of was I had attended the last World War I veteran who died in Iowa in about 2004 over in Maquoketa,” Palmersheim says. “I knew there was only one living World War I veteran left in the United State, and he’s out on the east coast, so it was just a shock to me to find one that was just never buried and never given the services that he’s entitled to.”

At two o’clock this afternoon a motorcycle pulling “The Iron Hearse” will carry Perrine’s remains away from a West Des Moines funeral home to the Veterans Cemetery. “We’re anticipating several hundred motorcycles in the procession out to the cemetery in Van Meter,” Palmersheim says.  “Once out there, it will be full military honors.  We have individuals from U.N.I. and from the Army that will be speaking as well.”

A headstone is already in place and Perrine’s remains will be buried in the cemetery which sits on a hill just south of Interstate-80.  Palmersheim says his agency and veterans groups are searching for the remains of other Iowa veterans who have been placed in an urn, but haven’t been buried.  “Other states are doing the same thing. It’s a ‘Missing in America’ project where they go to the funeral homes and try to find out if they’ve got cremains of individuals there and who they are and to give them a proper burial. Of course in the past, we didn’t have a state Veterans Cemetery so it was a matter of finding some place to bury them,” Palmersheim says. “Now we’ve got a place to bury them and give them the honors. Of course, at the Veterans Cemetery every day is Veteran’s Day and every day is Memorial Day there for our veterans and their families.”

The Iowa Veterans Cemetery was dedicated in July of 2008. If you’re interested in attending this afternoon’s graveside service, Palmersheim recommends getting to the cemetery early, by about 1:45, as parking will be difficult once the motorcycle-procession arrives.