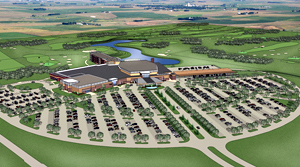 While entrepreneurs in northwest Iowa’s Lyon County launch plans for building a new casino, that facility could soon have competition just across the border.

South Dakota state Senator Gene Abdallah says he’ll sponsor a bill allowing a casino to be built in or near Sioux Falls.

The town of Flandreau, about 20 miles north of Sioux Falls, is home to the Royal River Casino. Meanwhile, Iowa’s proposed Lyon County casino is expected to draw 80% or more of its business from out of state, mostly from Sioux Falls. Abdallah says the location of the new Iowa casino certainly deserves a response from South Dakota.

“We thought it did a couple of years ago when we proposed putting it on this side of the line but the powers that be, there was not enough support for it,” he says.

Dan Kehl the C.E.O. of the company that’s building the Lyon County casino was asked Thursday about competition from South Dakota. “I think they’ve got a tough road ahead of them to do anything,” Kehl says. He says it would likely take 10 years to get a tribal casino going, and it would take some time for the state to get one going too.

On Thursday, the Iowa Racing and Gaming Commission approved an application for a casino license in Lyon County, while rejecting requests from Fort Dodge, Ottumwa and Tama County.

Photo courtesy of the Lyon County Resort and Casino