You are here: Home / Crime / Courts / Cedar Rapids clerk appears to have fought, stabbed her kidnapper 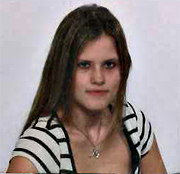 Cedar Rapids police have released more details on the kidnapping and recovery of a Cedar Rapids convenience store clerk.

Department spokesperson, Cristy Hamblin, says a delivery man notified police around 4:20 this morning that there was no-one in the Kwik Shop on the southwest side of the city. Hamblin says video footage from the store showed the clerk, Amanda Daniel, had been forced to leave by a man.

Officers then found a key clue outside the store. Hamblin says they found a bicycle at the store and people at other businesses told them that the bike belonged to Keith Van Elson Junior. She says they’re pleased that people were able to identify the bicycle and point them in the right direction.

Officers went to the four-plex where Van Elson lives and found another clue. She says officers got there and went to his apartment and found blood on the door. Officers knocked on the door and heard a female inside yelling for help.

Hamblin says officers entered the apartment and found Van Elson in the living room with a stab wound to his chest. They also found Amanda Daniel barricaded in the bathroom of the apartment. Hamblin says Van Elson did have a knife that was used to force Daniel from the store, but she does not know if it’s the same knife used to stab him. While it appears there was a struggle between Daniel and Van Elson, Hamblin says they are still waiting to piece everything together as Daniel was very traumatized by the whole thing.

“With any victim of crime, we never like to push them real hard, because they’ve already experienced something traumatic enough and to have to re-tell is it really asking them to relive the whole thing,” Hamblin says. She says the try to be sensitive to the victim and not force them to tell the story right away, while still getting the information in a timely matter.

Hamblin says the city put an ordinance in about 15 years ago that if a business is open from 5 a.m. to 5 p.m., then they have to have two people working, or video surveillance. She says this is a another example of why that ordinance is important. Hamblin says the alert delivery man and the neighboring business people who helped out were also important in solving the kidnapping quickly — or she says the outcome may’ve been different for the victim.