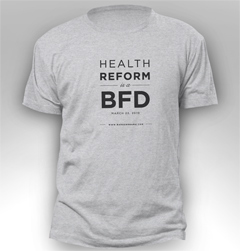 During a speech in Cedar Rapids yesterday, Vice President Joe Biden made a reference to his now-infamous commentary on health care reform that was picked up a “live” microphone and heard ’round the world.

Biden wrapped the words “big deal” around a common expletive moments before President Obama signed the health care bill into law. Yesterday, as Biden was praising something Governor Chet Culver had done, Biden brought it up.

“Folks, that was a big deal — a big, big deal,” Biden said and the crowd in Cedar Rapids laughed. “Thank God my mother wasn’t here to hear me whispering to Barack.”

Biden has called his declaration a “faux pas” but Biden’s briefly blue bit has spawned a money-maker for Democrats.

“Now I don’t know why everybody thinks it’s so darned funny. I’m as embarrassed as hell by it, but apparently we’re selling t-shirts and making hundreds of thousands of bucks,” Biden said. “I don’t know man. I’m sorry.” The Democratic National Committee t-shirts with Biden’s new catch phrase are selling for $25 each.

Biden was the keynote speaker at a rally for Governor Culver’s reelection campaign. The rally was held in a Cedar Rapids park over the noon-hour.