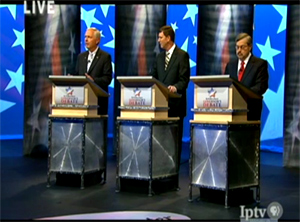 The third and final debate among the three Republicans who are running for governor featured claims that a rival was lying, along with a call for a cease fire.

“He did give me some helpful advice,” Vander Plaats said during today’s debate to open the combative session between Vander Plaats and Branstad. “He said, ‘Bob, the best way to beat an incumbent governor is not to have a political record that that incumbent governor can attack’ and…I think that’s why this election is so crucial on June 8 because I believe Chet Culver’s only chance at reelection is if we offer up a candidate with an extensive political record.”

Branstad, a four-term governor who’s going for a fifth term this year, disputed that. “Obviously, your memory’s not very good,” Branstad said. Vander Plaats interrupted: “March 14, 2000.” Branstad continued: “My advice was very clear: Go everywhere in Iowa, see as many people as you can, go to every county and campaign aggressively and tell your story. I never said you claimed that I did. That’s just not true, Bob. I’m sorry your recollection is wrong. Either that or you’re just flat out lying, but it’s just not true. I’m sorry that you keep doing things like that.”

Vander Plaats didn’t let up, suggesting both he and his wife remembered the conversation with Branstad “very clearly” as Vander Plaats considered running for governor in 2002. “We talked about a potential run for governor, having never run for political office before and the strength of the candidacy was being in education, being in health care, being in human services, chairing a governor’s council that you appointed me to and then not having a political record that (Tom) Vilsack — (the governor at the time) — could attack,” Vander Plaats said.

“And what you’re seeing on the Democrats attacking your record today, now, you may say it’s false, but a lot of records are footnoted. They’re true.” Branstad accused Vander Plaats of embracing the campaign tactics of Governor Chet Culver and his Democratic allies.

“The fact is that the way you win, whether it’s against an incumbent or not — and no incumbent’s been beat here since ’62, but this incumbent has an abysmal record and what they really fear is me because I’ve got a record of accomplishment and if I got up against him, they know he’s in trouble,” Branstad said. “And that’s why they’re already attacking me.” The third candidate in the race, State

Representative Rod Roberts of Carroll, rolled his eyes and looked to the ceiling as the two other competitors were making their charges and counter-charges. “I have heard from a lot of Iowans from across the state who have said, ‘You know Rod, be who you are and kind of stay above the fray,'” Roberts said. “And the kind of dialogue we hear today is the kind of attitude and actions that Iowans say, ‘You know — we’re done with that. We don’t like that.'”

During the hour-long debate each of the three candidates pledged to cut taxes, reduce government regulation and seek new restrictions on abortion. The debate was sponsored by The Des Moines Register and Iowa Public Television. You can watch it online now www.iptv.org., or watch it on I-P-T-V tonight at seven o’clock.