You are here: Home / Human Interest / Lost dog gets relay return to Iowa 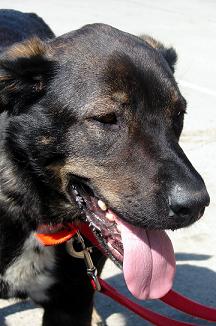 A lost dog is coming home to Iowa thanks to a host of animal-loving strangers and a social networking website. An animal control shelter in Battle Creek, Michigan, found a dog that was microchipped in Paton, Iowa, in 2007.

Linn Cipperley-Price is head volunteer with the Animal Protection and Education Charity, based in Paton. Her computer crashed and she’s now cross-checking eight-thousand paper cards, trying to find the right nine-digit microchip code to determine who adopted the female 80-pound dog. Meanwhile, a half-dozen volunteers are chauffeuring the floppy-eared German Shepherd-mix from Michigan to Iowa, passing it from driver to driver relay-style.

A volunteer in Battle Creek took the dog from the shelter to the vet for its proper shots, so it could be transported, and then drove it to Chicago. Another volunteer in Chicago kept the dog overnight and is driving it partway across Illinois today. Someone else will carry the animal to the Quad Cities area.

Another driver is taking it to Coralville, where a volunteer for the PAWS & More shelter in Washington, Iowa will pick up the pooch and bring it to Ames. Cipperley-Price will take it from there, taking the animal to a foster home in Paton until the owner can be located. She says the many hand-offs were coordinated over Facebook, though she was worried at first.

“Earlier in the week when we first started pleading on Facebook, it was like, ‘Hey, we need help, let’s get this dog out of harm’s way until we can figure this out,’ but (there were) no calls for 36 hours and all of the sudden, the calls and the emails just came flooding in.” Without the help of all the volunteer drivers, she says, the dog would’ve just been put to death in the crowded Michigan shelter. “If I would lose my dog, I would hope that volunteers would go out of their way to help me get it back, too, if it was my personal dog,” Cipperley-Price says.

“Hopefully when we do find the adopter of this dog, they’ll be just as grateful as well.” The Animal Protection and Education Charity in Paton is a “no-kill” shelter. Reach the shelter at: (515) 460-SPAY or online at “www.goape.info“.