You are here: Home / Crime / Courts / 9-1-1 caller: Slipknot bassist had pill bottles, needle near his body 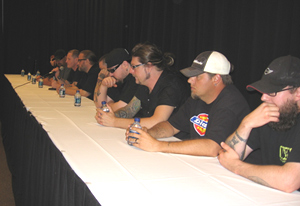 Members of Slipknot talked about the death of bandmate Paul Gray at a news conference Tuesday.

A hotel employee who found the body of Slipknot bassist Paul Gray said it appeared a drug overdose led to his death.

The worker called 9-1-1 at 10:50 Monday morning. He went to check the room after Gray’s mother called the hotel to say she could not reach her son by phone.

“Was his death expected?” The dispatcher asked. “We believe it’s a drug overdose,” the worker responded.

The maintenance employee at the TownePlace Suites in Urbandale said there were several bottles of pills in the room. “There’s a hypodermic needle next to his bed,” the worker said. He added that it appeared Gray had been dead for a while.

“His hands and legs are all purple. He’s hunched over in the corner next to the wall,” the caller explained to the dispatcher. The call lasted around six minutes. “Do you happen to know his name?” The dispatcher asked near the end of the call. “There’s a bottle of pills here that says Paul Gray,” the maintenance worker replied.

An autopsy performed Tuesday did not reveal a cause of death. The Polk County Medical Examiner said results of toxicology tests would not be available for up to six weeks. Gray was 38. He co-founded the band Slipknot in Des Moines in 1995.

The Grammy-winning metal group has sold millions of albums and played around the world.