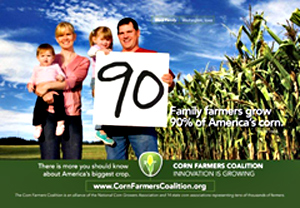 An Iowa family will be featured in a one-million dollar ad campaign targeting lawmakers and other policy makers in Washington, D.C. Kurt and Heather Hora and their two daughters live on a farm near Washington, Iowa.

They’ll be pictured on the ad which aims to show the corn growing industry involves mostly small family owned farms.

Shannon Textor with the Iowa Corn Growers Association says many members of Congress believe few real family farmers exist. The ad states 90% of the total U.S. corn production comes from family farmers. “So, that’s why we’re showcasing and putting a face on the family farmer and the Hora family did a great job of representing who we are here in Iowa,” Textor said.

The corn industry has taken a beating in recent years in several books and film documentaries linking corn to environmental problems and obesity. “There have been some negative stories out there and corn farmers have a great story to tell,” Textor said. “So, the ads are based on the facts and putting the face of the farmer to help tell the story.”

The National Corn Growers Association is partnering with state groups on the campaign which is being paid for through checkoff funds collected from growers. Kurt Hora, along with Textor, serves on the Iowa Corn Promotion Board. “He is a dedicated farmer and his family works very hard to provide a safe food supply,” Textor said. “He also raises hogs with his wife and family.”

The ads will be running in the nation’s capital through June and July. The corn growers group is pushing Congress to extend a tax credit for ethanol producers. In addition, corn growers are hoping the E-P-A will boost the limit on the amount of ethanol that can be combined with gasoline for use in vehicles.