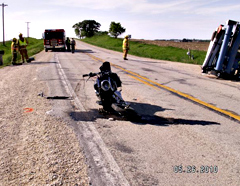 A man was killed and his wife critically injured when their motorcycle collided with a piece of farm machinery in northeast Iowa’s Fayette County. The crash was reported at 5 p.m. Wednesday on Highway 56 three miles southeast of West Union.

Martin Johnson died at the hospital last night. His wife, 44-year-old Dawn Johnson, is reported in critical condition. They were not wearing helmets. The driver of the pickup, 29-year-old Andrew Meyer of West Union, was not injured.