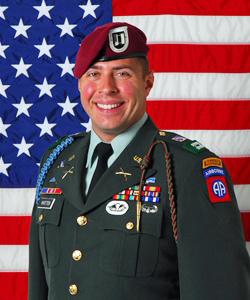 The southwest Iowa artist who paints a patriotic tribute on what’s become known as “The Freedom Rock” is honoring an Iowa soldier who died this year in Afghanistan.

Each year, for nearly a dozen years, Ray Sorensen of Greenfield has painted an image on a huge boulder located just off Highway 25 and south of Interstate 80. This year he’s paid tribute to Army Captain Daniel Whitten of Grimes who died in Afghanistan in February.

“There’s an image, and I think it ran in The Des Moines Register, of one of his Army buddies leaning down on (the memorial) they built — they took his rifle and his helmet and the dog tags are hanging off the rifle and his boots and, you know, a picture of Daniel and the medals he’d won and everything,” Sorensen says. “And that just kind of inspired me to represent something like that.”

Sorensen, who goes by the nickname “Bubba,” paints images on the two sides of the 60-ton boulder every May, with Memorial Day as his deadline. The image honoring the fallen soldier is on the main face of The Freedom Rock and the south side has a headline.

“I have the words, ‘All American’ and I have a Jewish rabbi who’s a military man saying a prayer. I have Muslim American who fought and died for our country. He just recently died, I believe, in 2007 and then I have a Christian woman kissing her cross,” Sorensen says. “I just wanted to represent that although we come from different faiths and backgrounds, we’re all American.”

Sorensen runs his own graphic arts studio in Greenfield. In 1999, while he was in college, Sorensen watched the movie “Saving Private Ryan” and he was inspired to paint the boulder as a tribute to America’s veterans. He’s been repainting The Freedom Rock every May.

“I’ve never been paid to do it and I’ve always said whether I get the support or whether I don’t, I’m going to continue to paint it as long as I’m able,” Sorensen says. “Nobody’s ever commissioned me. I just kind of keep on going on on donations and what support I get from my friends and family and, when that runs out and when I’m not able anymore, that’s probably when The Rock’s going to come to an end.”

One other component of this year’s image pays tribute to an Iowan who survived a fiery attack from the Japanese during World War Two.