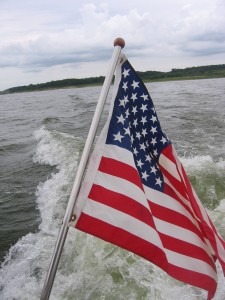 Two children have died in separate boating accidents in Iowa, while a family of four escaped injury when their boat was destroyed on the Mississippi River.
The Department of Natural Resources reports a 10-year-old boy was killed on Storm Lake in northwest Iowa this morning when a boat struck something in the water.
The collision forced the vessel’s outboard motor to flip backwards into the boat and on top of the child. Five other passengers were on board, one suffered minor cuts.
The names of those involved have not been released. D.N.R. officials are trying to determine what the boat may have hit in the water.

An accident on the Coralville Reservoir near North Liberty Sunday evening killed a 12-year-old girl from Fairfield. The D.N.R. says Sarah Nicole Perkins was struck by a boat after she had fallen off an inner tube being towed by another boat.

The names of the boat operators are being withheld at this time, while the accident remains under investigation.

A family from Wilton escaped their boat just before it was destroyed by a barge on the Mississippi River. The incident happened Saturday night south of Muscatine.

The boat was being operated by 29-year-old Andrew Oien when the motor stalled in the main channel. He could not get the boat restarted. Andrew, his wife Stephanie, and their two children, ages 3 and 1,  jumped overboard and were rescued by another boater. All four of the family members were wearing lifejackets.