Recent tension between North and South Korea brought special meaning to a war memorial dedication in Cedar Rapids Tuesday. Former Secretary of State, Colin Powell, was on hand. More than thirty thousand Americans died during the Korean War in the 1950s. Just more than five hundred were from Iowa. And now a six-foot tall memorial made of black stone, engraved with the name of every Iowan who died during the War is at Veterans Memorial Park in Cedar Rapids.

Powell didn’t specifically mention the recent tension between North and South Korea over the North’s alleged sinking of a South Korean ship. However, he did express his support for a free trade agreement between the U.S. and South Korea. “We pray for the day when no new memorials will be needed but until that day comes we are grateful that there are those who are prepared to go in harm’s way for our nation and we must ensure that they are never forgotten,” Powell said.

Powell also called for an end to the North Korean regime and for the country to abandon its nuclear weapons program. Iowan Sid Morris paid tribute to those who lost their lives. He joined the Army in 1952 and served for two years in Korea.

“Morris said,”It is incumbent on each and every one of us to tell the real story of this long ago war because little attention is given it today in our history books.” Morris says the Korean War played a key role in U.S. history. 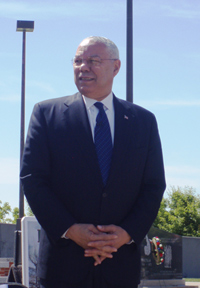 He says it was the “first major offensive to halt the spread of communism.” Morris says because freedom is not free, we must be “forever vigilant.”

In addition to the engraved names of soldiers — each of the four sides of the monument has a design, including the state flag and flower. Toward the end of the ceremony a wreath was laid next to the new memorial as dozens of veterans saluted to honor their fallen soldiers.