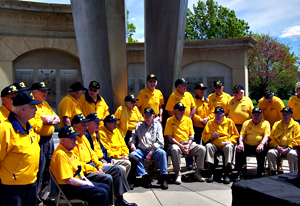 While Memorial Day is a time to remember the service of veterans, some from the “Greatest Generation” say they sometimes get overwhelmed by recognition.  Radio Iowa’s Dar Danielson reports.  Veterans 1:03 MP3

World War Two veterans by the thousands have been taking part in honor flights to Washington D.C. to see the national monument built in their honor. The veterans often wear the same color shirts as part of the group, and most wear a heat signifying they’re a veteran.

During a recent announcement of another honor flight, Bob Berman, a veteran from Des Moines, said he gets embarrassed when people notice his hat and come up and say “thank you.” Berman says it happened several times while he was visiting the national memorial, and also again when he was home. He says the black hat he wears that says World War Two Veteran in gold letters draws attention to him.

“This hat I wear, that’s gotten me about four free meals,” Berman told Radio Iowa, “I’m sitting in the restaurant and I’ll ask the waitress, ‘who do I pay’, that gentleman you were talking to, he paid your bill.” Berman says he still feels guilty because “it was not something we did expecting to get thanked for.” Other veterans said they experienced the same thing, and Berman says it’s because the feel they were doing what they had to do.

“If we hadn’t done this, we’d be speaking German, or we’d be speaking Japanese and the country wouldn’t be like it is today,” Berman said. Berman and the other veterans say the ones who are the real heroes, are the men and women who gave the ultimate sacrifice of their lives for their country and didn’t return home.