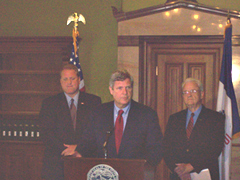 Vilsack says in Iowa “it’s fairly clear” 31,000 jobs were retained or created by the economic recovery act. “That’s roughly two-point-three percent of Iowa’s workforce. In other words, our unemployment rate, which is relatively low, relative to other states, would be two-point-three-percent higher but for the recovery act,” Vilsack said.

Vilsack says his agency is heavily involved in the economic effort in the state. Vilsack says there are at least 105 projects in the U.S.D.A. in Iowa that he says will create jobs over the course of the next several months. He says expansion of broadband access, business and industry loan programs and 68 community and facility grants are all part of the ag department’s effort to stimulate the economy in Iowa.

Culver says he feels good about where the state’s economy is as he prepares his run for a second term. “So I am happy to contrast my record against former governor Brantad’s on any issue related to the economy and unemployment,” Culver said. While Culver and Congressman Boswell are both running for re-election, Vilsack said he is not in Iowa to campaign for anyone.

But the former governor did give his assessment of Culver’s chances. “He’s in better shape than I was at this point in time in my re-lection effort, I would have been happy to have been in the place that he is in June of 2002,” Vilsack says, “I’m very confident that Governor Culver is going to be re-elected. I think he has a great story to tell. He has governed during very, very difficult times. Only somebody who has been in that position can fully understand how difficult it has been.”

Vilsack’s comments ironically would also indicate that Branstad has an understanding of the economic problems facing the state, as Branstad was governor during the farm crisis of the 1980s.