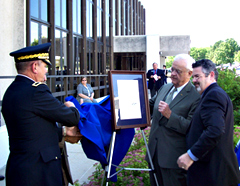 Some of the family members of fallen Iowa soldiers were on hand Thursday as the downtown Des Moines post office was renamed to honor the veterans from the state that have served in Iraq and Afghanistan.

Elizabeth and Bill Schiller of Ottumwa lost their son Jonathan in Iraq on New Year’s Eve in 2006. Jonathan was serving with the U.S. Army and his mom spoke about her feelings as the post office was dedicated.

“We’re overwhelmed every time we attend something like this…just the overwhelming kindness and thoughtfulness is wonderful,” Schiller said.

While the Schillers live outside Des Moines, both say it helps to know that their son will be remembered by hundreds of people who go there every day.

“It’s very comforting,” Liz Schiller said, and Bill Schiller added, “It’s just nice to know that our soldiers are being thought of in things like this and the importance of what they’re doing overseas, it’s really great to see.” Forty-six-year-old Command Sergeant Major Marilyn Gabbard, a native of Boone, died in a helicopter crash in Iraq on January 20th 2007. Gabbard’s husband Ed, also a veteran, was also at the ceremony.

Gabbard says it means a lot as he has sat with families from Iraq and Afghanistan who lost loved ones. “And to see them do something like this is very moving, because we’ve been at war eight years,” Gabbard said. He says those who fought in World War Two were called the “Greatest Generation” and now he says we have the “Next Greatest Generation.” Gabbard says he has friends who have deployed to Iraq already four times. Gabbard says this group of soldiers has stepped up just like the ones before it.

“We’ve got a great generation, it’s all volunteer as we all know, but they step up to the plate and do it,” Gabbard says. He says to deploy four and five times says a lot about today’s soldiers and their generation. Gabbard also says naming this post office as a memorial to soldiers is a comfort.