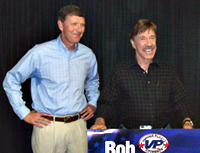 Candidates and their supporters are making the final push for Tuesday’s Primary election.  Republican gubernatorial candidate Bob Vander Plaats rallied with about 300 supporters in Des Moines late Saturday morning, opening with a reference to the Tea Party movement.

“Ladies and gentlemen, something’s brewing in the air,” Vander Plaats told about 300 cheering supporters. “And there’s going to be a surprise on Tuesday with a Vander Plaats victory.”

Moments before Vander Plaats appeared on stage, the crowd was chanting his name as Vander Plaats talked with a small group of reporters about voter turn-out efforts. “Our base is going to get out the people,” Vander Plaats said.  “Our counties are on fire.  They can’t wait to get out to vote.  This is just an example.” 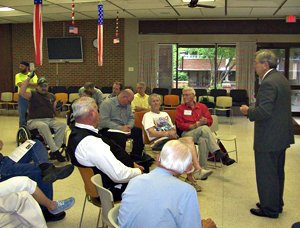 He walked in the “My Waterloo Days” parade on Saturday morning, as did the current governor, Democrat Chet Culver. Branstad’s last campaign stop Friday evening was in Marshalltown, where he met with about 20 people at the Iowa Veterans Home.

Branstad began by telling the crowd that he’s the only military veteran running for governor.

“I’m a veteran of the Vietnam era.  I served in the Military Police at Fort Bragg, North Carolina, and I’m proud to say that on Memorial Day this year — first time since 1991 — I got into my Army uniform,” Branstad said.

Branstad said his old uniform does fit now.  “I had to lose 13 pounds to get there,” Branstad said with a laugh, alluding to weight he’s lost since jumping into the governor’s race last fall, “but I did it.”  At the end of his remarks, Branstad again referred to his weight loss, saying it was evidence of his “focus.”

Branstad also spent several minutes railing against a Democratic-led group which is running ads criticizing his 16-year record as governor.  “They’re hoping they can trash me and not get as strong an opponent in the General Election, but we want to prove on Tuesday that they’re dead wrong,” Branstad said. “They’re underestimating the intelligence of Iowa voters and that’s why we need a strong vote in that Primary Election on Tuesday and then that will give us momentum to go on to restore honest, clean government and meet the needs of Iowa in the years ahead.”

During an interview with Radio Iowa on Friday evening, Branstad suggested his campaign will turn-out supporters in a “big way” on Tuesday. “I feel really good about it.  There’s a lot of indicators that are very positive,” Branstad said.  “We are making thousands of calls every day.  We’ve identified our supporters.  We are now making turn-out calls.” 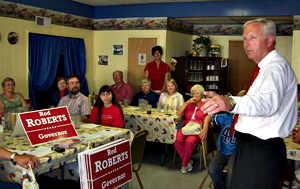 The third candidate in the race, Rod Roberts, made half a dozen campaign stops this weekend. On Saturday evening in Atlantic, about 25 people sat in The Farmer’s Kitchen restaurant for over an hour to listen to Roberts. Roberts told the group he’s not afraid to be considered the “nice guy” in the race because he hasn’t “bickered” with the other two candidates.

“Chet Culver is a vulnerable incumbent governor, but it will not be easy to beat him,” Roberts said. “And in order to defeat Chet Culver, our nominee has to be a unity candidate among Republicans.”

Roberts suggested he may still have a shot Tuesday because, he argued, no one really has a handle on how many people will vote Tuesday. “Because the people have been awakened and they are aware of what’s been going on and I have never seen the kind of unrest, anger and frustration towards government that I now see,” Roberts said.

Roberts did not mention Branstad by name, but Roberts promised he wouldn’t make being governor a career. “The founders never intended for elected office to be a career path,” Roberts said. “It was an opportunity for citizens to step up and to serve fellow citizens and, when your time is done, get out of the way and go back to the life you live like the rest of us do.” Roberts has served nearly 10 years in the legislature, representing the Carroll area.

Listen to Vander Plaats at his campaign rally in Des Moines by clicking on the following link:  BVPSaturday

Listen to Branstad’s speech at the Iowa Veterans Home in Marshalltown by clicking on the following link:  TEBFriday

Listen to Roberts’ speech at The Farmer’s Kitchen in Atlantic by clicking on the following link:  RRAtlantic