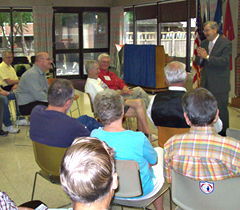 The three Republican candidates running for governor are trying to make last-minute connections with supporters in these final hours before Primary voting starts on Tuesday.

Terry Branstad is holding rallies for supporters in Marion, Davenport and Urbandale today and his campaign is making “thousands” of calls to supporters.  Ron Wilson of Marshalltown is among that group.  Wilson voted for Branstad in 1994 and plans to do so again in 2010.

“There’s history that he’s talking about and we lived through that,” he says, “and so we can appreciate that.”

Dorothy Wilson, his wife, says she likes Branstad’s “open attitude” and approach to solving the state’s budget problems. “We need a little bit of that honesty,” she says. 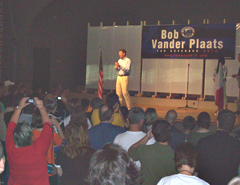 Bob Vander Plaats held a series of get-out-the-vote rallies this past weekend. Sandy and Melvin Heckart of Norwalk attended one of those rallies, the one in West Des Moines. “I like what he has to say and it seems like he handles himself on stage, on T.V.,” Melvin Heckart says. “We like him.”

Rod Roberts made half a dozen campaign “whistle-stops” over the weekend and he plans to hold rally in his home town of Carroll tonight. Merle Virgil of Oskaloosa is a Roberts supporter who dropped by a Roberts event in Atlantic on Saturday.

“I think he’s got a shot.  I think he’s going to surprise a lot of people,” Virgil said.  “And I think he’ll be very good for the state.” Virgil’s daughter was a college classmate of Roberts at Iowa Christian College. 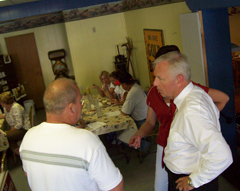