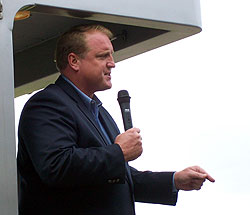 Democratic Governor Chet Culver offered a bit of bravado today after he cast his Primary Election ballot. “I’m ready to go right now.  12:01 this evening — it’s on now. I’ve had enough of the Republican rhetoric, the misstatements,” Culver said. “It’s time to fight for Iowa.”

Culver faces what many consider an uphill battle for reelection, as many public opinion polls have shown him trailing all three of the Republicans who’re competing for the shot to face-off against Culver in November. Culver talked with reporters after he voted in Des Moines. “My lucky number flashed on the screen. I was the 44th vote and I think that’s a good sign not only for the Primary but for the General Election,” Culver said. “Let’s let the race begin.  I cannot wait.”

Culver delivered a brief “welcome” to whomever the Republican nominee may be. “I’ve been anxiously awaiting the 9th of June for a long time,” Culver said.  “I want to get this race started.”

But Culver quickly sought to draw a contrast between himself and Terry Branstad, the four-term governor who has been a front-runner in polling in the Republican race. Culver argued he’s been an “effective” manager of state government for the past three-and-a-half years.  “Terry Branstad cooked the books according to the Republican auditor, Dick Johnson, who served with Terry Branstad, so that’s a choice that Iowans have,” Culver said. “It took Terry Branstad 10 years to reform the budgeting process so he followed the laws and kept the books according to the way that they’re supposed to be kept.”

Culver used Branstad’s name 16 times during a nearly seven-minute-long conversation with reporters, adding that his own record had been distorted. “Terry Branstad’s been making a lot of false charges and I want to correct the record straight,” Culver said.

Culver criticized Branstad’s call for a 15 percent cut in the state budget, saying it would lead to deep cuts in priority areas like education.  When a reporter asked if a Culver/Branstad match-up would be a “bare-knuckles brawl,” Culver said it would be.  “Yeah, and I can’t wait. I love a good fight,” Culver said. “We have a lot to fight for. We have to fight for civil rights.  We have to fight for workers’ rights. We have to fight for women’s rights.  Terry Branstad wants to require every woman to have an ultrasound before she makes a decision on her own health care. I mean, it’s really radical.”  The state of Oklahoma has a new law which requires women seeking an abortion to be shown an ultrasound first, and Branstad has said he’d support a similar law in Iowa.

On Monday evening Branstad told supporters who gathered at his campaign headquarters that he has a 10-0 record in elections and intends to make it 11-0 tonight.  Culver won two terms as Iowa’s secretary of state before being elected governor in 2006, so that’s a 3-0 record.