You are here: Home / Business / Branstad promises to be bulwark against labor bills 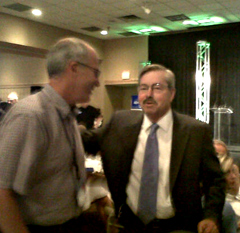 Terry Branstad talks with a supporter at campaign stop in Ames.

Former Governor Terry Branstad promises to be a bulwark against key pieces of union-backed legislation if he’s elected to a fifth term as governor.

Branstad won the Republican Party’s 2010 nomination for governor in Tuesday’s voting and today at noon he spoke in Ames at the Iowa Association of Business and Industry’s annual convention.

“I know, having been to some of your meetings over the last few years, you’ve been fighting a defensive battle trying to stop these job-killing labor bills. Prevailing wage — a bill that I vetoed in 1984 — nine states have repealed it.  No state has passed it since that time,” Branstad said, pounding on the podium for emphasis.  “And yet they came within one vote of passing it through the House of Representatives.”

Branstad praised the 44 Republicans in the Iowa House as well as the six Democrats who opposed the bill and helped kill it even though the proposal had the support of Democratic legislative leaders and Democratic Governor Chet Culver had promised to sign it into law.  The bill would have required a county’s “prevailing wage” be paid to those who work on construction projects that are financed with state tax dollars.

“Help is on the way.  Change is coming,” Branstad said, the volume of his voice rising as the members of the Iowa Association of Business and Industry began to applaud.  “I am not going to ever let that become law when I am governor of this state.  That is the wrong thing to drive up construction costs.”

Branstad warned Democrats would seek to advance other bills sought by organized labor if Democrats retain control of the governor’s office and the Iowa House and Senate. “All of those ideas, along with expanding public employee collective bargaining, are dead when I become governor,” Branstad said.

Branstad gave a brief speech to supporters Tuesday night in Des Moines, so today’s address at the Iowa Association of Business and Industry marked Branstad’s first campaign appearance as the G.O.P’s nominee to challenge Democrat Chet Culver’s bid for reelection.

“I am excited to be back on the arena and I can say yesterday was a thrilling day. We had three really good candidates that ran spirited campaigns. I feel honored to have been chosen, to have gotten the Republican nomination for governor,” Branstad said.  “I intend to work very hard to earn your support and your help and we’re going to need your assistance across the state to be successful in the fall.”

Branstad told the crowd that he tried to recruit others to run for governor last year, but when that effort failed Branstad said he felt compelled to run because of the state’s precarious fiscal condition. “And you know, this is a year that people aren’t very happy with incumbents — and I haven’t been in office for more than a decade,” Branstad quipped and the crowd laughed.  “And I want to get rid of the present incumbent because he’s driven the state into the biggest budget deficit in history.”

Branstad spoke for about 20 minutes and, a few moments later, Branstad held a news conference where he discussed how he’ll choose a running mate.  Branstad faces a deadline of June 26th for that decision, as that’s the date of the Iowa Republican Party’s state convention when a lieutenant governor will be nominated.

Click on the following link to listen to Branstad’s speech at the Iowa ABI convention in Ames:  TEBABI