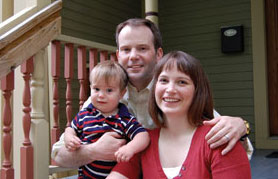 Iowa Democrats meeting this weekend at their state convention in Des Moines have nominated a candidate to face Republican State Auditor Dave Vaudt in November. No Democrat ran for the nomination for state auditor on last Tuesday’s Primary ballot, but 39-year-old Jon Murphy of Des Moines won the slot on the Democrats’ statewide ticket through nomination at the party convention.

“I think one of the most compelling things for me was the incumbent auditor’s recent endorsement of Governor Branstad,” Murphy said late this morning during an interview with reporters covering the convention. “I think that showed extremely poor judgement given former Governor Branstad’s record of keeping two sets of books and I think that kind of judgement needs to be replaced in the auditor’s office.”

Vaudt publicly endorsed Branstad’s bid for a fifth term during a news conference on May 11, calling Branstad the candidate “best qualified” to lead Iowa at “this difficult time.”

Murphy has taken a leave of absence from his job as director of the Iowa Office for State-Federal Relations for Governor Culver. Murphy had worked as director of federal relations for Iowa State University and, before that, he worked on Congressman Leonard Boswell’s staff.  Murphy sent an email to Iowa Democratic Party convention delegates this past week, saying he would seek the nomination for state auditor.  According to Murphy, Republicans have begun attacking his background.

Vaudt, the current auditor, is a Certified Public Account. Murphy is not a C.P.A., but he argues that shouldn’t concern voters because the state auditor doesn’t conduct audits; he is the chief office manager. “One of the things I want to do is make the auditor’s office the chief transparency officer for the State of Iowa,” Murphy said. “We need a single, executive-level office that keeps all of the people’s spending online so you and everyone else can go see where their money’s being spent.”

Murphy is a Des Moines native, a graduate of Dowling High School and a 1994 graduate of Iowa State University. In 2007, Murphy was unanimously confirmed by the Democrats and Republicans in the state senate to his role as director of the Iowa Office for State-Federal Relations. Murphy faces Vaudt, who is seeking a third term as state auditor.

“It is no surprise that Democrats want to get rid of the voice of reason within the state capitol,” Republican Party of Iowa chairman Matt Strawn said in a written statement issued Saturday afternoon.  “…Governor Culver repeatedly ignored Auditor Vaudt’s warnings, causing major budget cuts and property tax increases on Iowans. Auditor Vaudt has consistently watched out for Iowa taxpayers, and Iowans will ask him to watch their backs again, come November.”