The Republicans who ran for the third district congressional seat joined primary winner Brad Zaun today to endorse Zaun. Jim Gibbons finished a distant second in the primary to Zaun.

“The people that follow this man…basically they have the same attitude, they’re positive, they’re respectful,” Gibbons says. Gibbons says competing against Zaun and coming face-to-face with the people that supported him showed he had a “positive glow” that bore out in the election results, particularly in Polk County.

Gibbons says Zaun, who is currently a state senator from Urbandale, will go on to defeat incumbent Democrat Leonard Boswell in November.

Other candidates joining Gibbons at Zaun’s campaign headquarters were Scott Batcher, Pat Bertroche, Dave Funk and Jason Welch. Mark Rees had a prior commitment, but Zaun said Rees also supports him. “This is an incredible experience,” Zaun said, “because these are people (who) were competitors. And I can tell you what, there’s a lesson to be learned by everyone that wants to run for office. I think the example that was set by the third congressional race, I think the respect that we all have for each other, the way the race was run, was something everybody should look at.” 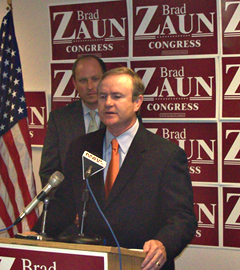 Zaun says the unity will help them going into the fall. “You win or you lose with dignity,” Zaun says. He says they will be able to show clear differences in the general election race. While the third district candidates are showing unity following the primary, there’s still some question about whether that unity exists when it comes to the candidate for governor. Republican Party chairman, Matt Strawn, says his party has shown more backing for its candidate than Democrats.

Strawn says a 16-year high of 226,000 Republicans showed up to vote in the primary. “Juxtapose that to what we’re seeing from the Democratic Party in this state. The estimates we’ve seen show their turnout was a 60-year low,” Strawn says, “In fact, lets look at their state convention this past weekend, they barely had a quorum to conduct business.” Strawn says everything has been positive in all their events since the primary.