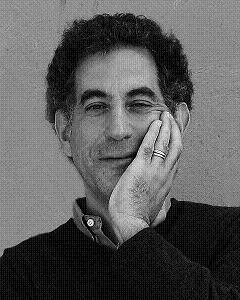 A University of Iowa journalism professor and author traveled to four continents to do research for his latest book which chronicles his pursuit of pearls. Stephen Bloom named his nonfiction odyssey, “Tears of Mermaids: The Secret Story of Pearls,” a journey that took him around the planet, from Iowa to New York and from Hong Kong to Tahiti.

Bloom says, “I wanted to track a single pearl from the moment a diver off the Australian coast scoops up from the ocean floor an oyster with a pearl inside all the way to the instant a woman 10,000 miles away fastens the clasp to a necklace containing the very same pearl.”

Bloom grew up in what he describes as a modest, middle-class family and his mother wore pearls on special occasions, only once or twice a year. He recalls being fascinated with what he thought were white marbles on a string. Bloom admits he’s something of an obsessed detective when it comes to learning all there is to know about the elegant round gems.

“I thought that I would be able to provide readers with an Indiana Jones kind of saga, but also a way to look at the world a little differently,” Bloom says, “to explore the interconnections between global politics, the environment, world finance and high fashion.”

Bloom calls pearls the “original gem,” as they pre-date faceted diamonds and intricate gold jewelry. Pearls, he says, were first on the list of reasons Columbus came to the New World in 1492. In his endeavor to trace the ten-thousand mile journey of a single pearl, from oyster to necklace, Bloom says he ended up traveling three times that distance himself and filled 71 notebooks over four years.

“I did travel 30,000 miles,” Bloom says. “I went to four continents. I hired myself out as a pearling deck hand on an Australian pearling vessel. I tromped through the Philippine jungles. I fished for freshwater pearls in rural China.” On a remote Philippine island, Bloom says he dove for gigantic gold-colored pearls that sell for $10,000 apiece. He also met with the world’s three “reigning pearl lords,” who he says control about 70-percent of the planet’s pearl market.

Bloom will be reading from “Tears of Mermaids” next Friday (June 25th) at 7 PM at Beaverdale Books in Des Moines, his only planned appearance to promote the book. Bloom is the author or co-author of two critically-acclaimed nonfiction books, “The Oxford Project,” (with Peter Feldstein) and “Postville: A Clash of Cultures in Heartland America.” He also wrote a collection of his nonfiction stories, “Inside the Writer’s Mind.”