This is another in a series of reports on the Iowa National Guard training at Camp Riley in Minnesota.

The training for deployment to Afghanistan for Iowa National Guard soldiers includes a lot of planning and also some acting.    Dar Danielson report 1:40 MP3

The Iowa soldiers will come into Afghan villages with some idea of what to expect from the local people after running training sessions known as lanes. Soldiers from Davenport begin their exercise where they seek out insurgents with a strategy session. They go over the village set up that is laid out in a rough map drawn in the sand.

A squad leader tells them where to position their gunners to secure the village. They then mount their vehicles and pull into a mock Afghan village that includes former Afghan citizens who are acting out roles to give the soldiers an idea of what they might face. One of the Afghan actors who plays the village leader “Mullah Saeed”, explains the first reaction is not good.

He says the villagers get really angry because they don’t understand what is happening. He says the American soldiers have to explain they are coming in to help rebuild the country and get rid of the Taliban and insurgents. The platoon leader seeks out the village leader or mullah, and through an interpreter tries to ease the village concerns. The Mullah says villagers are mad because the soldiers have damaged crops, and the platoon leader says they will pay for any damages. 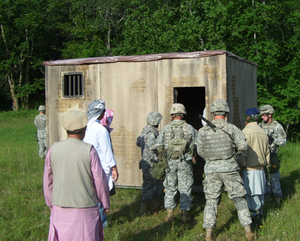 A gift of food and medicine leads to the mullah providing information to the platoon leader on the village location of an insurgent, and the soldiers known as the breech team move in.

They fire on and kill the insurgent after it looks like he is going to set off explosives, and the squad leader gets on the radio to tell everyone what happened.

The soldier confirms one insurgent has been killed and bomb-making materials were found. While all this is going on the other soldiers are trying to maintain security while also interacting with the local population. They try to keep the villagers a safe distance away without being offensive in their actions.

The exercise wraps up with an After Action Report where soldiers discuss the good and bad things they did during the mission. They then load up and prepare to do it all again with a new scenario and new actions by the villagers. See more photos below.