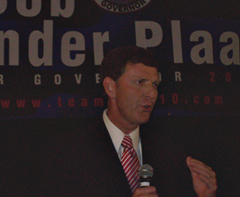 The Republican gubernatorial candidate who finished second in the Primary on June 8, 2010 is considering an independent run for governor.

Bob Vander Plaats also would consider accepting the Republican Party’s nomination for lieutenant governor if delegates at the state convention on Saturday select him instead of the woman the party’s gubernatorial nominee wants as a running mate.

Late this afternoon Vander Plaats was a guest on the “Deace in the Afternoon” program on WHO Radio, the first public comments Vander Plaats has made since Primary Night and his loss to Terry Branstad.

According to Vander Plaats, he has not been invited to Saturday’s convention, but Vander Plaats would consider attending if delegates nominate him for lieutenant governor. Vander Plaats said he’d find it difficult to decline the nomination if he were to win the convention voting over Kim Reynolds, Branstad’s choice.

Vander Plaats described a private meeting he had with Branstad after the Primary, saying Branstad didn’t seem to “see the divide in the (Republican) Party” which Vander Plaats argued is evident in the Primary election results.  Branstad won about half of the votes in the Primary.  Vander Plaats got about 41 percent and a third candidate got nearly nine percent.

If he doesn’t win the G.O.P’s lieutenant governor nomination, Vander Plaats isn’t ready to say he’s running as an independent candidate in November, but he’s not shutting the door on the possibility either. “I will only run for a couple of reasons. Number one is: I believe I’d have a clear chance of winning…and two is if I believed that was the only way to be a voice and a champion for these particular issues for what these people care so deeply about,” Vander Plaats said.  “…I haven’t even walked very far down that road to say that’s in the mix right now.”

Meanwhile Congressman Steve King says it’s time for his feuding fellow Republicans to bury the hatchet and unite behind Branstad. Some Vander Plaats supporters who are upset with the outcome of the June 8th Primary have vowed not to vote for Branstad in November under any circumstances.

“It’s up to Republicans to take a look and come together because if we fail to do so, we are handing the governorship to Chet Culver for a second term,” King says. “It’s that simple.”

King expressed regret for his own failure to speak privately with Vander Plaats in these weeks since the Primary.  But King suggested Vander Plaats had “put on the Republican jersey” in three different elections and to run as an independent violated the rules of engagement.

“No matter how badly you want to be governor, this state takes precedence over anyone’s career aspirations and we should all look do everything we can do, within the limits of the positions that we hold or aspire to hold, and look to the cause first,” King said. “I’ve heard that sermon out of every one of the candidates. I hope they all live by it.”

A spokesman for the Branstad campaign is expressing confidence Branstad’s pick for lieutenant governor will be nominated by delegates at the Republican Party’s state convention on Saturday.  Tim Albrecht, the communications director for the Branstad campaign, predicts Republican delegates will make a “full-throated endorsement” of Kim Reynolds, Branstad’s choice for a running mate.

“We have an overwhelming, enthusiastic, energetic group of supporters behind this campaign,” Albrecht says. “A vast, overwhelming majority of Republicans are supporting the Branstad/Reynolds ticket. That was evident in our statewide tour and it’s going to be even more evident among the Republican activists on the convention floor.”

On Thursday morning, Branstad announced Reynolds was his pick for lieutenant governor and the two made seven stops around the state together that day.  Albrecht says Branstad won’t be discussing the private meeting he had with Vander Plaats earlier this month, a meeting Vander Plaats said didn’t go well. As for whether there’ll be another face-to-face meeting between the two men, Albrecht was mum on that, too.

“We aren’t going to take any vote for granted, be it fiscal or social conservatives, independents, like-minded Democrats,” Albrecht says. “We are going to work hard for every single vote including those of our Primary opponents Rod Roberts and Bob Vander Plaats.”  Albrecht made his comments late today during a telephone interview with Radio Iowa.