You are here: Home / Fires/Accidents/Disasters / Water runoff from weekend rains has many eyes on flood gauges 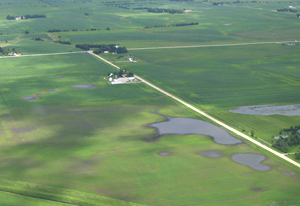 Water in fields in western Iowa.

Much of Iowa is in a watching and waiting game to see how much water is going to flow off the land and into rivers and streams.

Karl Jungbluth of the National Weather Service says while the skies have cleared, we still have to worry about what the clouds left behind.

“Late last week through the weekend, everybody was dealing with the flash-flooding and the rapid rises, and the ponding the fields, and now it’s working its way through the rivers, and that’s going to take some time. Iowa’s rivers have a fairly shallow slope, so it takes a long time to move all that water downstream,” Junbluth explains.

Central Iowans have the biggest concern from the water that’s flowing downstream.

“The big impacts at this point are along the Des Moines River basin, because we had so much heavy rain up there north of Des Moines into the Fort Dodge, Webster City areas on up north to the Minnesota border,” Jungbluth says,”the big flooding right now is on the Des Moines River, down to Saylorville.”

The Corps of Engineers says the water coming down will cause the water to top the spillway at Saylorville on Tuesday, as the amount of water coming down is more than can be released from the dam. Jungbluth says much of the state is under some type of flood watch or warning. 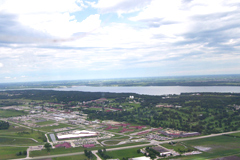 “It includes pretty much the entire state, including the northwest and west, which is a little less common for getting a lot of flooding in those areas,” Jungbluth says. He says eastern Iowa has some flood warnings, but says the Iowa and Cedar Rivers are not as high as they were during the record flooding in 2008. Jungbluth says the forecast should help out as things look to be pretty dry this week.

“We got the faucet turned off at least it looks like through Thursday, Friday and Saturday, and possibly some chances (for rain)coming in again Sunday and the week after the Fourth of July, until then, we’ve got a nice dry period coming up,” Jungbluth says. He says any dry period helps conditions improve as the watershed gets chance to drain off without any additions.

Go to: www.weather.gov/dmx for a complete rundown of the flood watches and warnings.