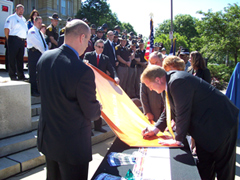 Governor Culver signs a pledge to not text while driving.

Public safety officials and the governor gathered for an event on the statehouse steps to highlight new laws that take effect tomorrow, July 1st. One bans texting while driving and forbids most teen drivers from talking on a cell phone while they’re driving.

The other requires backseat riders who’re under age 18 to be belted in. After the officials spoke, a group of Des Moines teens called the Creative Visions Traffic Safety Team entertained the crowd. The group had a chant in which they asked their friends not to text while driving.

Colonel Patrick Hoye, the chief of the Iowa State Highway Patrol, commended the group for being mentors and role models.

“It’s something you should be proud of and it’s the same vision that we have in the state patrol and, because of that, today I would like to make you honorary troopers,” Hoye said. “So if you would come to attention, put your hands down beside you, I’d like to swear you in as an honorary trooper.”

The teens promised to always wear a seat belt and to never text while driving. They also pledged to encourage all their friends to “curb it and click it.” “I will work to the best of my ability as a passenger or a driver to make every vehicle I ride in a ‘no phone zone,'” Hoye had the teens repeat, as part of their oath.

Hoye thanked the teens for their efforts, telling the group they would make a difference in traffic safety. One of the teens responded: “Amen.” Earlier, the governor and other state officials signed a pledge, promising to wait to send or respond to a text message until they reach their driving destination.

The head of the Iowa D.O.T. says those who use mobile devices while they’re driving are four times more likely to be involved in a crash. An A-T-and-T official says there’s been a ten-fold increase in text message traffic in the past three years. A-T-and-T as well as the state of Iowa are launching public education campaigns aimed at driving home the message about the dangers of texting while driving.