You won’t have to look very far to see motorcycle riders in the state’s capitol city and surrounding area this Fourth of July weekend. Vicki Comegys with the Des Moines Convention and Visitors Bureau says thousands of Honda riders are attending the Gold Wing Road Riders Association’s annual “Wing Ding.”

Comegys says this is the 32nd Wing Ding with riders all across the country, and there’s even a group from New Zealand that flew in and purchase bikes to ride in the event. The motorcyclists are holding various parades for people to watch as part of the events.

The parades can be colorful as she says 60 to 80 of the motorcycles have lights all over them that light up, and that includes the Goldwing trailers that light up. One of the events tonight (Friday) is a parade from downtown Des Moines through various neighborhoods, ending up in the suburb of Urbandale. 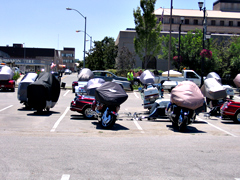 Goldwings parked in Des Moines with covers on them.

Comegys said Thursday they were still registering participants and getting a handle on the number of two and three-wheelers involved. “They’re anticipating somewhere between 10 and 14,000,” comegys says, “they typically have right at 10,000 from their membership, and then based on the local community is where they gather that additional four-thousand for people who may be Goldwing riders but not members.”

The Goldwing event adds to an already busy holiday weekend that features concerts, parades and fireworks. Comegys says they’ve had to do a lot of coordinating with local and state officials to make sure everything goes off smoothly.

Comegys says there was some construction scheduled over the Saylorville bridge, and they had that changed, as the riders were told it was a good route to ride while they were here. She says things like that were part of the planning, as was changing the times the D-O-T was marking the off ramps on the interstate to not conflict.

To find out more about the Wind Ding, go to the Great Des Moines Convention and Visitors Bureau website at: www.SeeDesMoines.com.