You are here: Home / Human Interest / Iowa native returns from NYC with multiple roles in musical about The Four Seasons 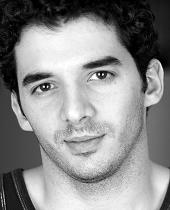 An Iowan who’s danced his way across Broadway is returning to the stage in his home state this week to sing some of the top songs of the 1960s and ’70s. “Jersey Boys” is the story of four blue-collar kids who became one of the greatest successes in pop music history.

Thirty-one-year-old actor Kevin Worley is a Cedar Rapids native who plays one of the original members of the Four Seasons, though “Handsome” Hank Majewski’s time with the band is brief. “I also play probably eight or nine other characters, from cops to accountants to production assistants to bass players, guitar players, mandolin players,” Worley says. “I keep myself very busy throughout the show.”

He says it’s sometimes a challenge to keep all of his characters straight. “Each one of those little parts has its own little scene and it’s kinda’ fun,” Worley says. “It moves pretty quickly. I always joke, when I talk to people at the show, that the only way I know what’s going on is by which costume they throw on me backstage.”

Worley says, laughing, he’s essentially made a life for himself as a “professional clothes changer,” as he often only has seconds to completely change his attire for the next scene.

In an interview with Radio Iowa, Worley says he considers himself neither an actor who sings nor a singer who acts. “I like to say that I do it all,” Worley says. “I’ve made my career, for the most part, up ’til this last two years, as a dancer. I was a tap dancer, I am a tap dancer. I’ve done ’42nd Street’ and ‘A Chorusline’ on Broadway. This is one of the first shows that I’ve done where I don’t really dance.”

Worley has been touring with the musical for 16 months and has no plans to stop, as they already have dates booked into 2012.

Frankie Valli and the Four Seasons wrote their own songs, invented their own sounds, sold 175-million records worldwide and had seven top-ten hits – all before they were 30. “Jersey Boys” won the Tony Award for Best Musical in 2006.

The show runs Wednesday though Sunday at the Civic Center of Greater Des Moines. For information, visit www.CivicCenter.org