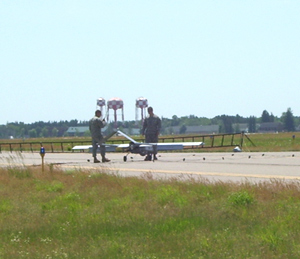 Unmanned plane on the runway.

One of the tools available to the Iowa National Guard in their deployment is a small remote-contolled airplane that gives them an eye in the sky.

They can shoot video and print out pictures from the plane’s camera. Brumley says the camera has a high resolution that can give soldiers a lot of intelligence information.

“You can be at 15,000 feet and see a person clear as day, tell that it is an actual human being,” Brumley says. The plane can also pick out people in trees or when they can’t be seen. 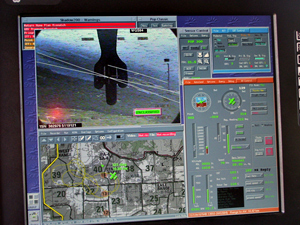 Computer screen showing camera view and location of the UAV.

He says it has an infrared camera that detects heat. The plane is launched off a rail on the back of a truck, so it does not need a lot of airstrip to take off. The mobile trucks can spread out and operate the plane from different points, or the plane can be operated from a stationary tent.