You are here: Home / Business / Gingrich blasts Obama as “out of touch” with economy (audio) 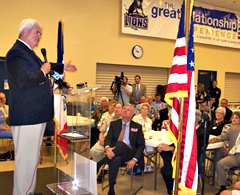 Former House Speaker Newt Gingrich says the number one challenge in America is creating jobs and he advocates a series of tax cuts as a way to get the economy growing again.

Gingrich is in Iowa, leading a day-long workshop for Iowa Republican candidates. But Gingrich started his day with a half-hour-long appearance at a fundraiser in Urbandale for Republican congressional candidate Brad Zaun. Gingrich blasted the Obama Administration for racking up federal debt and he said the president is “totally out of touch” on the economy.

“If the president had any understanding of this country, he would borrow James Carville’s sign from 1992 that said, ‘It’s the economy stupid,’ he would put it up in the Oval Office and they would open up every meeting talking about the economy and getting back to the economy,” Gingrich said.  “Instead, they’re doing just the opposite. They are capriciously killing jobs every time they turn around.”

Gingrich suggested a series of tax cuts, including elimination of the inheritance tax and tax breaks for small businesses that buy new equipment. He also proposed a one-year, 50 percent reduction in Social Security taxes. “Which would also mean every American would come to realize how much they’ve been paying,” Gingrich said, “and that would set the stage for the right kind of entitlement reform.” 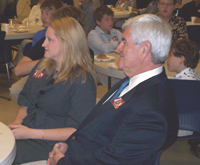 Gingrich said elimination of the tax on capital gains would spur investment and job creation.  Gingrich has said he’s pondering a bid for president in 2012. Gingrich sprinkled details of his tenure as House speaker into this morning’s speech, saying he had intervened to “save” the federal tax break for corn-based ethanol.

“My position was very simple. If I have to choose between the money going to Iowa, South Dakota, Illinois or going to Venezuela, that’s pretty easy for me to pick,” Gingrich said, to applause from the crowd.  “That probably lets you know I’m a conservative and I have a bias in favor of American money staying in America to create American jobs.”

He also told the crowd the federal budget had been balanced for four years when he was speaker. “And we could get back to that within three to five years,” Gingrich said. “But what it requires doing is giving up all of Obama’s big dreams, all of his big plans, all of his giant bureaucracies.”

According to Gingrich, “every modern democracy” in the world has had politicians who’ve “promised more than they can deliver” and it’s time to reduce the size of government here and elsewhere, and make government more effective.

Listen to Gingrich’s speech, following by a brief question-and-answer period with the audience:  GingrichZaun