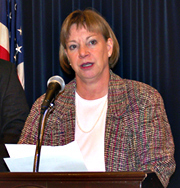 The Iowa Department of Public Health’s annual report on diseases shows an 18% increase in diagnosed H-I-V cases in 2009. State Medical Director, Patricia Quinlisk, says the increase in H-I-V cases is a concern they continue to address.

“We are trying to do more outreach to get more people tested, because we do know there is a pretty good percentage of people who have H-I-V who have never been tested for H-I-V,” Quinlisk says. She says they’re trying to locate high risk people for testing, because once they are diagnosed, there are “interventions” that can be used.

There were 127 H-I-V cases diagnosed in 2009 — which exceeds both the 10-year average of 104 from 1999 through 2008, and the five-year average of 113 cases from 2004 through 2008. The report says the data shows that “a disproportionate number of black, non-Hispanic men with an exposure risk of having sex with men are being diagnosed with H-I-V.”

The report also says cases of Lyme disease in 2009 topped 100 for the third consecutive year. Quinlisk says the Lyme disease is spreading probably because the deer and mice that carry it are spreading across the state and more people are now living in the counties where the ticks that carry the disease are living.

Quinlisk says identifying cases of Lyme disease continues to be a problem. She says unfortunately there’s not a really good test for Lyme disease, although it has improved some, and she says doctors are becoming more aware of Lyme disease — especially in areas where they did not have Lyme disease in the past.

One of the other big issues for the Health Department in 2009 was the H-1-N-1 flu outbreak in early May, followed by a second wave in October and November. Dr. Quinlisk says their response was hampered some by a lack of vaccine, but they did learn from the outbreak.

“We certainly learned better how to use sort of mass vaccination systems and how ensure that people get messages about whose at risk and who is not at risk, how to run vaccine clinics at a local level,” Quinlisk says, “so there were a lot things that were learned in this experience so if something like this should happen again where we need to do mass vaccinations, or mass treatment of antibiotics, then we will do a better job of it.”

The report says there were 644 hospitalizations confirmed by laboratory evidence of H-1-N-1 in 2009, and 41 deaths. The report says “in late October, more than 500 Iowa schools reported at least one day of absence due to illness that met or exceed 10% of the school’s enrollment. That equates to one third of all Iowa schools experiencing illness during that week.”

Quinlisk says the food-borne diseases are one area that could really be cut back if people would take more preventative action. “The biggest thing there is of course, that people if they have diarrhea, should never ever touch food that is meant for somebody else. And that if you do have diarrhea, it is very important the you should stay home,” Quinlisk says. She says they have had cases where someone with diarrhea has gone to a school, a wedding or church and spread the disease to many more people.

The full report is available on the Iowa Department of Public Health’s website at: www.idph.state.ia.us.