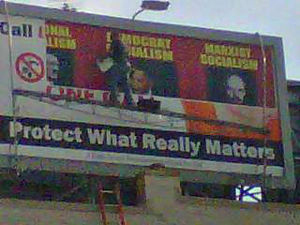 A billboard in Mason City that pictured President Obama flanked by Nazi leader Adolf Hitler and communist leader Vladimir Lenin has been papered over this morning.

The phrase “radical leaders prey on the fearful and naive” had been plastered at the bottom of the billboard yesterday.  Ryan Rhodes, chairman of the Iowa Tea Party movement, says the billboard was counterproductive.

“It’d be great to have a billboard that’s really actually helpful, that’s not demonstrating fear but demonstrating freedom and that we have solutions and goals,” Rhodes says.

The North Iowa Tea Party paid to put up the billboard in downtown Mason City, drawing criticism — including criticism from others in the Tea Party movement.  Rhodes, the chairman of the Iowa Tea Party, hopes the new blank slate that’s now in that spot could be put to better use.

“It’s got to be more than just the initial shock/fear value,” Rhodes says.  “What we need is something that accomplishes our goals because our goals are about helping people understand and educating them about our nation’s founding and the path bath to American exceptionalism.” 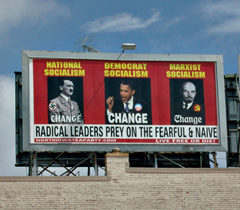 Rhodes says the negative response from Tea Party leaders like himself should show the state and country they “have a better message” than the one depicted on that billboard.

“Our message is rising above that. It’s not what we are.  I think the fact that it’s down today is a testament that the movement is going to go further,” Rhodes says.