State and local officials gathered in Mitchellville today for the groundbreaking on a new state prison for women. Patti Wachtendorf, the warden of the Iowa Corrections Institution for Women, says the new facility will be the “premiere” women’s prison in the country when it’s done. 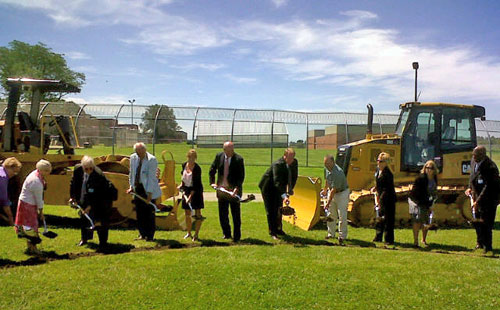 “Honestly, we’ve been long-overlooked.  Women have taken leftovers throughout the state,” Wachtendorf says.  “…In 1982, 50 women moved here from Rockwell City and it was a training school, so we went in, took a training school and made it into a women’s prison.  Did we make it work?  You bet we did, but it’s not the opportunity that we have today to design a prison for women.”

About 27 percent of the women who’ve been paroled from the current facility committed another crime and have been sent back. The warden says the environment in the new prison will be focused on helping the female prisoners learn skills to help them succeed once they’re released.

“Today really is history for Iowa — building a new prison for women,” she says.  “…It’s going to be a bright, positive female facility to make the changes these women need to make and that’s why we’re here.”

Robyn Mills, chair of the Iowa Board of Corrections, says this day has been a long time coming. “I worked for a number of years in the legislature and we always knew that there were problems out here, but we never knew how to address them without pouring tons of money in — and it always seemed like there was never enough money and we consistently put Band-Aids on (the women’s prison),” Mills says.  “But now I’m very excited to see that this new facility is going to be built.”

The $47.5 million for the construction project comes from the state’s I-JOBS program. The I-JOBS money was borrowed and is being paid back with some of the gambling taxes the state licensed casinos pay the State of Iowa. Governor Culver says 350 people will be hired for construction of the prison and about 200 more people will work full-time in the new prison when it’s done.

“Those hardworking men and women and their families will benefit from this important project,” Culver says.

Today there are more than 700 women in the current state prison in Mitchellville, up from nearly 600 in 2000.  John Baldwin, the director of the Iowa Department of Corrections, says 40 percent of the women coming into the state’s prison system have a diagnosed mental illness and the new women’s prison will have “an amazing” mental health facility inside.

“We are going to address that very aggressively,” Baldwin says.

A new maximum security prison for men is being built in Fort Madison to replace the current facility — “The Fort” — which is the oldest prison on this side of the Mississippi.