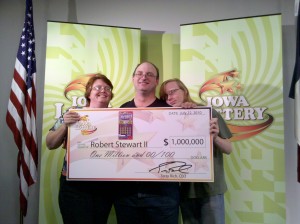 Life just got a little easier for a family from northwest Iowa. This morning, Robert Stewart II of Aurelia became the Iowa Lottery’s seventh $1 million winner this year. Stewart stopped by lottery headquarters in Des Moines a few hours later to claim his prize. “Oh my God, I can’t believe I won this,” Stewart told reporters.

Stewart, 41, dropped off his wife Deb at work at an auto parts store in Storm Lake this morning before driving across the street to a convenience store to fuel up. He purchased the last $20 “Lifetime Riches” instant scratch game the store had. “I don’t normally buy the $20 tickets…I scratched off the top numbers and the first one I scratched off was $40,000 a year,” Stewart said.

Stewart verified the ticket was a winner at the store before rushing back to his wife to relay the good news. He joked that she wasn’t all that thrilled. “She was going to hit me for (buying) a $20 ticket,” Stewart said with a laugh.

Stewart said he plans to buy a new car to replace a ’96 Oldsmobile, but doesn’t expect to make many other big purchases. “Not until we get the student loans and mortgage paid off,” Stewart said. “Then we’ll talk with a financial advisor and get most of it invested.”

Robert Stewart says he plans to keep working as a manger of Game Stop, a video game shop in Storm Lake. “These days, even a million dollars isn’t really enough to retire on unless you don’t want to eat very much,” Stewart said. “I couldn’t leave work immediately. We’ve to decide what we’re going to do. It’ll take us a couple months to make that decision.”