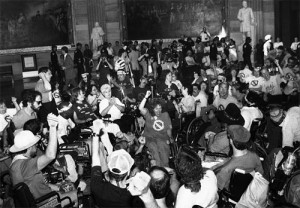 Senator Tom Harkin will make stops in Des Moines and Iowa City this weekend to mark the upcoming 20th anniversary of the Americans with Disabilities Act. Harkin was the chief Senate sponsor of what’s become known as the A.D.A., a federal law that secures what Harkin calls the “fundamental rights” of the disabled.

“It’s about ensuring that people with disabilities can go places and do things that other Americans just take for granted,” Harkin says.

Harkin will headline a rally at the statehouse on Saturday morning to celebrate the law’s 20th anniversary, then he’ll be in Iowa City Saturday afternoon for an event on the city’s Pedestrian Mall. According to Harkin, the A.D.A. has sparked a “quiet revolution” that many Americans haven’t noticed.

“How soon we forget, prior to A.D.A., Americans with disabilities routinely faced prejudice, discrimination and exclusion, not to mention the physical barriers to movement and access in their everyday lives,” Harkin says.

Monday, July 26 is the 20th anniversary of the day President George Herbert Walker Bush signed the Americans with Disabilities Act into law.  Harkin will attend several events in Washington, D.C. on Monday to mark the law’s 20th anniversary, including a Monday afternoon event on the White House lawn and a gala at the National Press Club Monday evening.

“The reach and the triumph of the A.D.A. revolution is all around us,” Harkin says.  “It’s become a part of America.”

Harkin, who is a Democrat, spoke about the A.D.A. this week in the U.S. Senate, reminiscing about his speech just before the bill passed. “When I spoke on the floor 20 years ago, I did it all in sign language,” Harkin said. “I’ve neglected to do so today. I think since my brother passed on I don’t speak sign language very often and I don’t practice much any more and I’ve forgotten many signs.”

Harkin’s brother, Frank — who was deaf, died ten years ago at the age of 78.

Senator Harkin, who is 70, closed his speech this week in the Senate by saying the Americans with Disabilities Act brought everyone in the country “into the circle” and made America “much more complete.”