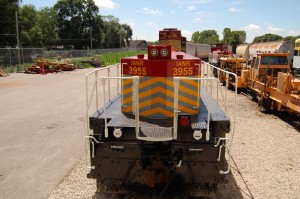 A rail line that runs between Waterloo and Cedar Rapids now includes a couple of locomotives that are designed to reduce air pollution. Karl Brooks with the Environmental Protection Agency says Iowa Northern Railway used $300,000 in federal stimulus funding to convert two diesel engines into “slugs.”

Brooks says a slug uses electrical power. “It feeds off a regular diesel engine, so you double the power, but you don’t have any diesel emissions and you don’t have any fuel costs for it,” Brooks explained. A slug looks a bit like a mini locomotive. Brooks describes it as a “cut-down, jalopy locomotive.”

The new slugs are expected to cut diesel emissions quite dramatically and save Iowa Northern money on fuel costs. “It’ll probably save Iowa Northern, on average, about 20 to 30 percent on it’s diesel fuel bill on each engine per year,” Brooks said. Iowa Northern’s entire fleet includes 20 locomotives and 500 rail cars. The company estimates the retirement of two engines converted into slugs will result in an air pollutant reduction of more than 220 tons per year.

Officials with Iowa Northern, the EPA and Iowa DNR put the slugs on display at a press conference in Waterloo on Wednesday. Brooks outlined the details during a stop at the Radio Iowa studios in Des Moines on Thursday.