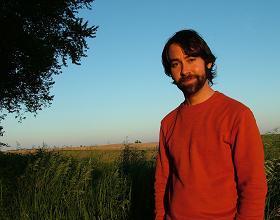 An eastern Iowa author says there just aren’t enough love stories out there for 30-something Iowans, so he’s written one.

Zachary Jack lives on a farm in rural Jones County and his book is called “What Cheer,” after the Keokuk County town where it’s set. The 36-year-old Jack says, “It’s a love story between several friends but also for Iowa, really.”

He says his generation needs this type of story. “A lot of the love stories are written for folks who are quite a bit older,” Jack says. “I’d like to think that rural Iowa can have love stories for young people too, although there aren’t very many of us out here.”

There are no vampires or wizards in this tale, he says, calling it a story of simple rural romance and courtship. In the book, one of the characters is swept off his feet by a list of sweet, old-timey items he receives by mail from an anonymous admirer.

“The list is a list of things from their childhoods that are endangered, really, Iowa rural Midwestern touchstones that are in danger of passing into extinction,” he says. “They’re things like May baskets and globes, whistlers, Sunday drives, all those sorts of things.”

Jack says he’s well-qualified to write about these disappearing icons of Iowa culture as he’s a seventh-generation Iowan, and his family’s held the same Cedar County farm since 1885.

Jack is in the midst of a book tour across Iowa. Towns he’ll visit over the next week include: Dubuque, Dyersville, Marion, Lisbon, Iowa City, Marengo, Pella, Grinnell, Knoxville, Oskaloosa, Columbus Junction, Muscatine, Fairfield and Keokuk.

Learn more about the tour at www.loveofiowa.org or the book at: www.iowasource.com/books/2010_07_zachary.html