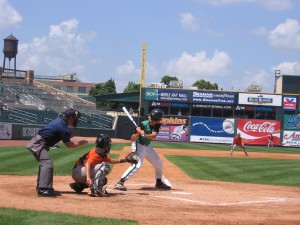 High school baseball teams playing in the state tournament this week are forced to adjust to the more spacious conditions at Principal Park. Center field measures 400 feet and it is 335 feet down the first and third base lines. That means there are fewer home runs and more ground to cover for outfielders.

Martensdale-St. Mary’s, the top-ranked team in Class 1A, has hit 51 home runs this season but had none in a first round victory against AR-WE-VA (Westside).

“We just go up there with the mindset of trying to get a good pitch to drive,” Martensdale-St. Mary’s coach Justin Dehmer says.  “Some of the home runs we hit certainly wouldn’t go out at Principal Park, but there were others that probably would have…Doubles, triples — we’ll take those, too.”

Dehmer says it’s worth it to have the state tournament in the stadium, even if it changes the game a little bit.  “What else could you want?  It’s the best place to play in Iowa as far as I’m concerned,” Dehmer says. “It’s second to none.  It’s awesome.  They take great care of it and they treat it well.”

Remsen St. Mary’s opened the Class 1A tournament with a victory over Southeast Warren and coach Jim Klein says the surrondings seem “massive” to the players as there’s a bigger field, bigger stands and larger crowds — .    “You probably get a lot less home runs, which is fine with me.  I don’t have a problem with that,” Klein says.  “It’s just the euphoria of everything going on.”

Class 2A third ranked Davis County has 47 home runs this season, but did not have one in Monday night’s quarterfinal round victory over PCM (Monroe). Davis County coach Todd White says the dimension are not all that much different from what his team experienced during the regular season.  “In our conference we play in a couple of parks of very similar size to what Principal Park is, so our kids are kind of used to it,” White says.