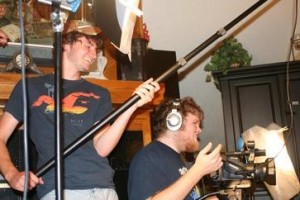 Dozens of aspiring filmmakers from across Iowa may be a bit bleary-eyed today, as they got virtually no sleep since Friday. Sam Tuomi, of Des Moines, is the producer of what’s known as the 48-Hour Film Project, which ran its course over the weekend.

The project is open to all filmmakers, from novices to professionals. They’re challenged to make an entire short film, from scratch, in one weekend. Tuomi says the movie has to be written, filmed, edited and produced all within 48 hours.

He says the films are required to be between four and seven minutes. They all had to include a character named Carl or Carla who’s a plumber, use coins as props and include the line “Who came up with that?” in the dialogue. Tuomi says it’s a wonderful challenge for filmmakers of all skill levels.

“With technology the way it is today, they’re able to shoot a short film that wouldn’t be possible just a few years ago,” Tuomi says. “Every year, we’ve seen the entries just get better and better.”

This year, 48 teams took part in the project across Iowa and 44 of them met the Sunday deadline. Tuomi says one of the teams is comprised entirely of high school students.

The movies will be screened Wednesday and Thursday at the Fleur Cinema and Cafe in Des Moines, with the top 12 judged films being shown there in a special presentation on August 12th. The top filmmaking team wins $1000.