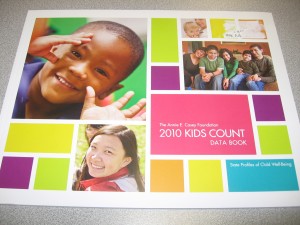 A new study ranks Iowa as the sixth best state for children to live. The annual Kids Count study from the Anne E. Casey Foundation places Iowa behind only Massachusetts, Utah, Vermont, Minnesota and New Hampshire – which topped the rankings.

Michael Crawford is the Iowa Kids Count Director with the Child and Family Policy Center in Des Moines. “Every year since 1991, when they started doing the Kids Count national report, (Iowa) has been in the top ten…I think every year except for one,” Crawford said.

Iowa ranked as the best in the nation in two categories; percentage of teens not in school and not working (4%) and the high school dropout rate (3%). “I think we have a good culture in place where we understand education, we think it’s important and that’s passed on from generation to generation,” Crawford said. “Kids go to school thinking that’s an important thing and know they need a high school diploma to get a decent job, if not going on to college afterwards.”

The Kids Count study compared data collected between 2007 and 2008 with the results of the study in 2000. During that time, the number of Iowa children living in poverty rose from 13% to 14%. “Some of that is a reflection of what’s happened in the economy the last few years,” Crawford said. “We saw a little bit of an increase in the early part of this decade, then things leveled off, but now it’s increased again unfortunately.”

The study also shows Iowa recorded a 12% increase in low-birthweight babies between 2000 and 2008. The percentage of children in single-parent families also climbed over the period. “I think the reason for that is we have a lot of mothers who are giving birth at a young age, in their late teens and early 20s, and are probably not ready either financially or emotionally to give birth. Unfortunately, some kids suffer because of that,” Crawford said.