You are here: Home / Fires/Accidents/Disasters / Lake Delhi residents seeking help in any form 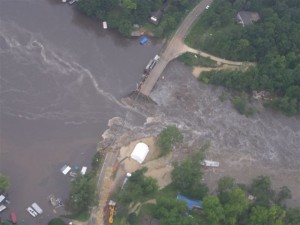 Governor Chet Culver says he’s confident Lake Delhi will be restored, but some property owners around the lake in Delaware County aren’t sure they’ll be there by the time it’s a lake again. The dam on the lake burst last Saturday, damaging or destroying hundreds of homes and boats and other property.

Lake Delhi property owner Mark Thompson says some retirees’ dream homes are gone. “They’ve got their life savings wrapped up in some of these places,” Thompson said. “Tearing out the flood damage is one thing, but restoring it is another. There’s a lot of people that can’t afford to restore their property right now.”

The area is privately-owned, meaning government assistance to Lake Delhi residents could be limited. Lake Delhi trustee Jim “Buzz” Graham collects the tax money supporting the lake and dam. He says residents need all the help they can get from volunteers, the state or federal government. “We’re looking for anything from anybody that we can get,” Graham said.

Governor Culver says he has the authority to “tap” a broad range of state programs and cash reserves to find money for flood victims. In addition, Culver is asking President Obama to declare Delaware County and other counties in the area as disaster areas – which would clear the way for federal financial assistance.