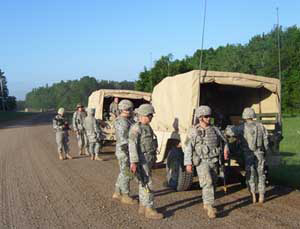 Afghanistan. The farewell events are being held in Algona, Boone, Eagle Grove, Mount Pleasant, Keokuk and Storm Lake. Guard spokesman Colonel Greg Hapgood says they’re the first of 28 sendoffs that’ll be held over the next nine days for the massive activation of the 2nd Brigade Combat Team, 34th Infantry Division.

“All told, there’ll be 2,800 Iowa Army National Guard soldiers on this deployment,” Hapgood says. “It’s the largest single deployment of the Iowa National Guard since World War Two so we’re really talking about historic times here.” The citizen-soldiers will be covering a lot of miles over the next few weeks.

The deployment will last about a year. The soldiers will first head to Camp Shelby, Mississippi, and next to Fort Irwin, California, for more training before heading to Afghanistan. They should be back home around July or August of 2011. Hapgood says the Iowa troops will be asked to perform a variety of tasks while serving overseas, as this is what’s known as a “full spectrum” mission.

They may be doing what’s referred to as combat operations, but Hapgood says they’ll also likely be supporting and training the Afghan National Army and police units, providing security for “nation-building types of details” and providing assistance on humanitarian relief missions. He says most Iowans likely know of someone in uniform who’s a part of this large operation.

“If you look at the soldiers, what is very striking is that they come from more than 560 different communities across the state,” Hapgood says. “This will reach virtually every corner of the state and have some kind of impact in a huge number of communities.”