You are here: Home / Politics / Govt / Pawlenty’s advice: “get a new president” (AUDIO) 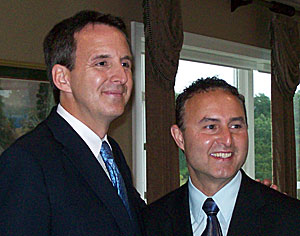 Republican Tim Pawlenty touted his budget-cutting “executive experience” as governor of Minnesota as he headlined fundraisers today for legislative candidates in Iowa, the state which hosts the first contest in the 2012 presidential campaign.

During an interview with Radio Iowa as he traveled from one event to another, Pawlenty declined to directly compare his executive experience with potential 2012 competitor Mitt Romney, the former Massachusetts governor, but Pawlenty did contrast his time governing a state of five million with President Obama’s performance governing a nation of more than 300 million.

“If you’re going to run something large and complex, it helps to have run something large and complex previously,” Pawlenty said of Obama, who was an Illinois state senator, then a U.S. Senator for two years before his election as president in 2008. “I think, candidly, one of President Obama’s short-comings, now that he’s managing the crisis, for example, in the Gulf is he doesn’t have any sort of experience or perspective to fall back on because he’s never led a large organization.”

Pawlenty’s first appearance Saturday morning was at the Dubuque Country Club where he headlined a fundraiser for a local Republican legislator.  Pawlenty stressed an economic message, decrying the “goofballs” in congress who have approved federal budget deficits.  Yet Pawlenty told the crowd of about 60 Republicans it was important for the G.O.P. to “gently and constructively” remind voters of the “values” the Republican Party hopes to advance in 2010.

“I think people are concerned, but they also don’t want to just be afraid,” Pawlenty said later during his conversation with Radio Iowa.  “They don’t want to just hear people being critical or negative.   I think we also need to show that we have ideas that are hopeful and optimistic and positive and can lead the country and our states forward in a better direction…You’ve got to have the ideas to back it up.”

During a question-and-answer session with the crowd in Dubuque, Cheryl Kramer of Dubuque told Pawlenty the federal government bail-out of the auto industry was “ridiculous” and she followed up by asking for “his ideas” for getting the money repaid.

“Well, what you can do is get a new president and a new congress and make sure it doesn’t happen again,” Pawlenty quickly replied, to applause from Kramer and the rest of the crowd.

Listen to Pawlenty in Dubuque: PawlentyDubuque