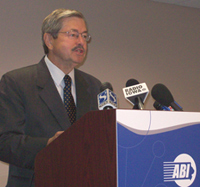 The Iowa Association of Business and Industry’s political action committee has endorsed Republican Terry Branstad’s bid for a fifth term as governor.

Sarah McDonald Hasken, vice president of A.Y. McDonald Manufacturing in Dubuque, is chair of the group’s board of directors. She criticized Chet Culver, the current Democratic governor as she announced the backing for Branstad.

“A.B.I. members don’t believe that our state is on the right track,” she said.  “Instead of facing tough challenges, our state has borrowed millions of dollars and pushed problems down to future generations.  Instead of providing leadersihp in making Iowa a better place to grow, our state has considered job-killing policies that effectively take Iowa out of the running for economic development.”

Kirk Tyler, chairman of the Association of Business and Industry’s PAC, is president of Atlantic Coca-Cola Bottling Company and he, too, is critical of Culver’s stewardship of state government.

“Like many Iowa companies we have faced a tough economy the last four years, but I had a pretty good mentor that explained that we shouldn’t spend more than we take in and I think that’s pretty good words to live by,” Tyler said. “At the same time we haven’t seen that kind of leadership in the State of Iowa through these tough times.”

Branstad joined Tyler and McDonald Hasken at a news conference this morning.  “I’m honored and pleased to receive your endorsement and support. I have a lot of respect for the Iowa Association of Business and Industry,” Branstad said.  “I worked with this organization going way back to when you used to be called the Iowa Manufacturers Association, back in my early days in the legislature.” 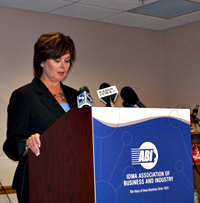 Branstad served three terms in the Iowa House before being elected Iowa’s lieutenant governor in 1978.  Branstad has said if he’s elected to a fifth term as governor he will work to reduce the corporate income tax and the property taxes on business and commercial real estate.

“Iowa needs a pro-business, pro-growth governor who will reduce taxes and not increase debt,” Branstad said this morning during the news conference.

The Iowa Association of Business and Industry represents 1,400 Iowa firms that employ over 300,000 Iowans.