You are here: Home / Education / Culver: boost general state aid to schools by 4% 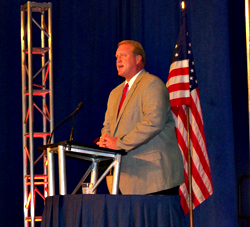 Governor Chet Culver says the state’s economic future is “bright” and, if he’s reelected to a second term this fall, he’ll press for a four percent increase in the amount of general state support of public schools for the 2011/2012 academic year.

A spokesman for his Republican opponent, Terry Branstad, calls it a “hollow promise.”

Culver, a Democrat, spoke late this afternoon in Des Moines at the School Administrators of Iowa annual meeting and his pledge to boost state aid to schools was greeted with applause.

“I think we have to do all we can to make sure that we make that investment in our students, in our schools and our teachers across this state,” Culver said. “And I believe as the economy continues to improve, we will be in a position to do that.”

According to Culver, a four percent increase in general state aid to schools would be a boost of somewhere between $300 million and $400 million for K-12 public schools. Culver told the crowd of principals and superintendents it’s a matter of setting priorities.

“And when it comes to education, that will continue to be at the very top of my list as long as I’m governor and we have weathered the storm,” Culver said. “Iowa is back.  We are growing again.”

Culver touted a variety of economic reports during his speech to the school administrators, from a Gallup poll on consumer confidence to Forbes magazine ratings about the state’s business climate. “Our unemployment rate is still the eighth-lowest in the nation. It’s higher than it should be and we’re working on bringing that donw, but our unemployment rate is still three percentage points below the national average,” Culver said.  “Our foreclosure rate is one of the fifth lowest in the nation and Iowans are very optimistic about our future.”

Culver outlined five education-related goals for a second term in office, including ensuring every four-year-old in Iowa has access to a quality preschool program by 2014.  Culver plans to deliver much the same message tonight to members of the state teachers’ union — the Iowa State Education Association — at their meeting in Storm Lake.

Culver pledged to support efforts to boost the high school graduation rate for minority students. He also called for making financial literacy part of the “core” courses students must pass in order to graduate.

Boeyink said Branstad would be outlining his own education agenda in the coming weeks.

Listen to Culver’s 17-minute speech to the School Administrators of Iowa:  CulverSAI