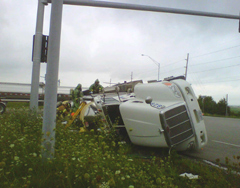 A tanker truck hauling a mixture of sodium hydroxide tipped over this morning on an Interstate 380 northbound on-ramp in Cedar Rapids.

It happened shortly after 6 a.m. at the intersection with Wright Brothers Boulevard Southwest. Fire department spokesperson Greg Buelow spoke with Radio Iowa from the scene.

“There’s no environmental threat at this time or threat to people in the area,” Buelow said.

“The leak has been more or less stopped.” Sodium hydroxide is also known as caustic soda or lye. It’s white colored and odorless. It’s used as a chemical base in manufacture of pulp and paper, textiles, soaps and detergents.

“The main concern we have here is not about something blowing up or anything like that. But, it’s acidic and caustic…it would cause a burn,” Buelow said. “The people in the immediate area are not in any danger. We have firefighters in protective suits.” Members of a hazardous materials team are working to transfer the 50-thousand (50,000) pounds of sodium hydroxide from the tipped tanker to another tanker truck. Buelow says the process has been difficult since the workers can’t access the normal off-loading valve.

The valve is on the ground, so haz mat workers are cutting a hole in the top of the steal tank to create a relief valve. Buelow says the I-380 on-ramp, the I-380 exit ramp and Wright Brothers Boulevard will remain closed until at least noon. It’s not clear why the tanker overturned.

The driver of the truck, who’s from Illinois, suffered minor injuries. The sodium hydroxide shipment came from Muscatine and was bound for Red Star Yeast in Cedar Rapids.

Update at 11:40 p.m.:
Cedar Rapids police says the driver of the tanker, 39-year-old Joe Short of Colona, Illinois was charged with failuer to maintain control.