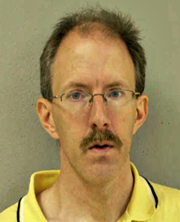 Fisher identifies the suspect as 40-year-old Timothy Parker of Westgate. He is the pastor of St. Peter Lutheran Church in Westgate. Fisher says Parker was arrested after several interviews with the victim and a search of Parker’s home.

He is charged with two counts of lascivious acts with a minor and one count of sexual abuse in the third degree.

If convicted on all of the charges, Parker could face up to 30 years in prison. Fisher says some evidence is being collected from Parker’s computer and could be sent to the Iowa Crimes Against Children Task Force for further review. The church’s website shows Parker has been the pastor there since September 2001.

“This is probably a shock and devastation for the community of Westgate. My heart goes out to that community,” Fisher told Radio Iowa. The St. Peter Lutheran Church in Westgate formed in 1885.