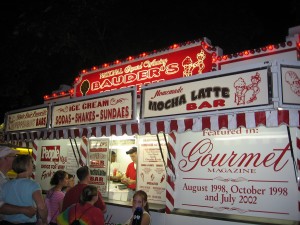 This year’s Iowa State Fair in Des Moines features the slogan “non stop fun,” but fairgoers can also stuff themselves with non stop food. There are more than 200 food stands on the fairgrounds.

Fair spokesperson Lori Chappel says one new food item this year is the Fair Square. It’s essentially a Rice Krispie bar on a stick. Fair Squares cost $2 with all proceeds benefiting the Blue Ribbon Foundation, which funds improvements to the fairgrounds.

The newest food stand on the fairgrounds should be popular with the kids. It’s called The Chicken Coop. Their menu includes peanut butter and jelly sandwiches, minus the crust, cut in the shape of farm animals. They’ll also serve “Octodogs” – hot dogs in the shape of an octopus, on a stick, served on a bed of macaroni and cheese.

More than 50 food items at the fair are served on a stick. The newest food-on-a-stick is called a Twinkie Log. “It’s a frozen Twinkie dipped in white chocolate and rolled in cashews,” Chappel said. “That’s going to join the menu at the deep fried candy bar stand in front of the grandstand.”

The Iowa Pork Producers are also adding a new menu item this year – the ground pork slider. The Iowa State Fair opens this coming Thursday and runs through August 22.