You are here: Home / Fires/Accidents/Disasters / Ames could surpass record flood level of 1993

Evacuations are underway in Ames, where volunteers are needed to fill sandbags as water levels are expected to crest at unprecedented highs. City of Ames spokeswoman Susan Gwiasda says the flooding Skunk River and Squaw Creek will likely beat the record high water levels set nearly 20 years ago.

“We are experiencing potential river levels at crests we’ve never seen before,” Gwiasda says. “These are comparable to 1993 and perhaps beyond 1993. People in Ames will recall that was substantial flooding that set new records in the community.” She says everyone in the Ames area is being warned to be vigilant for fast-rising water.

Gwiasda says they’re telling people to prepare their homes and businesses for inundation by water and to make sure they’re safe and have a plan in place in case they need to leave quickly, due to a flash flood. Many roads are closed by high water, after last night’s third straight night of heavy rain. Some areas of the state got six inches of rainfall overnight.

Jerry Stewart is chief of the Department of Public Safety at Iowa State University. Stewart says roads are closed all over the I.S.U. campus and he’s issuing an advisory. He says to use extreme caution, don’t attempt to drive through the water or even try to walk through it. The campus is open, he says, but many roads are closed. Stewart says they’re watching the water rise near I.S.U.’s Hilton Coliseum. 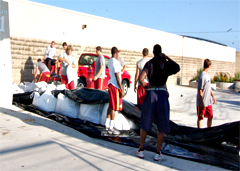 “The portion of the street near Hilton is closed due to high water…Lincoln Way down to South 4th Street,” he says, “however crews set in sandbagging yesterday and early this morning as well.” He says those sandbags are in place, as well as a floodwall at the nearby Maple Willow Larch dorms.

Elsewhere in Ames, the Red Cross has opened an emergency shelter while evacuations have been underway in low-lying areas on the south side of the city.

Iowa State football players came in for their early morning weightlifting session and ended up lifting sandbags to help fight the flooding.  The water in the Hilton Coliseum parking lot was approaching the Jacobsen Building, home to most sports offices.

Iowa State players joined athletics department staff and student trainers and managers to moved as much football equipment as possible to the Jacobson Building’s second floor. The Cyclone sport medicine area was also being cleared of movable equipment. Some items are being stored in the building’s atrium, some moved to the second floor.