You are here: Home / Fires/Accidents/Disasters / One resident’s take on Colfax flooding: “it sucks” 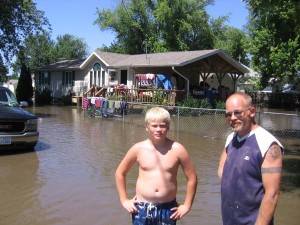 Chuck Buehrer and his son Jake, 12, in front of their flooded home

Residents of Colfax who battled the flood of 1993 say the situation they’re dealing with this year is worse. Chuck Buehrer owns one of the 200 to 300 homes on the west side of Colfax that are under water. “It sucks,” Buehrer said about the mess. “I’m not going to lie to you.” Floodwaters have closed two of the four roads leading in and out of Colfax – including Highway 117 which connects with Interstate 80.

Buehrer was awakened by a phone call from the Jasper County Sheriff’s office at 2 a.m. Wednesday. He was told a levee burst on the Skunk River and water was quickly spilling into his neighborhood. By Wednesday afternoon, Buehrer had five to six feet of water in his basement and the river had yet to crest. “We had probably 50 people here at one time. We were just loading out furniture…anything and everything we could get our hands on to get out of here,” Buehrer said. “The basement’s completely empty. We still have a little bit of furniture upstairs. We’re going to hope and pray it doesn’t get into the main floors of the house.”

Other homes in Colfax, closer to the river, have water on the main floor. Some residents also lost vehicles in the flooding. Buehrer and his wife have lived in two different houses on same property since 1988. They knocked their old house down after it was flooded in 1993. Buehrer says the floodwaters are even higher this year. “We built up higher and put this house on a new foundation after (the ’93 flood). We’ve stayed dry as a bone ever since…until this,” Buehrer said. The couple does not have flood insurance.

Buehrer plans to stay in the home and will get to work on cleaning out the basement once the floodwaters recede. “My garage is full (of water) too,” Buehrer said. “It’s all insulated, so I’ve got that issue to deal with too. It’s just going to be a lot of work from here on out.” The Buehrers have two children.